This page refers to Current Scenario on Disability.

On 9 June 2011, WHO and the World Bank officially launched the first-ever World report on disability. This landmark report reveals that more than 1 Billion people in the world experience some form of disability.

In addition, governments should work to increase public awareness and understanding of disability, and support further research and training in the area. Importantly, people with disabilities should be consulted and involved in the design and implementation of these efforts.

World report: Prevalence of moderate and severe disability (in millions), by leading health condition associated with disability, and by age and income status of countries.

All age groups are prone to ear and hearing disorders but, it is essentially the younger age group which faces the maximum morbidity in this regard. The common ear diseases that are prevalent in our country include Chronic Suppurative Otitis Media, Secretory otitis Media and Wax impaction. A large number of these diseases are preventable. Others can be treated medically or surgically. Effective and early treatment of these ear diseases can lead to improvement in the outcome of the affected persons.

However, it is estimated that over 166 million people in the developing world face a severe lack of intervention services for hearing loss. According to the World Health Organization (WHO), this crisis results from a substantial increase in "disabling hearing impairment" over the last 15 years. This is compounded by a severe shortage of skilled health care workers, especially so in the developing countries.

NOISE as a cause of hearing loss:

Recent reports WHO[2002] and Nelson[2005] state that worldwide, 16% of the disabling hearing loss in adults is attributed to occupational noise ranging from 7% to 21% in various sub regions. However, Noise is no longer an occupational problem alone, as it is has now permeated all aspects of our social life. Smith et al. (2000) found that the number of young people with social noise exposure has tripled (19%) since early 1980s while occupational noise has decreased. Serra et al. (2005) studied that sound levels of Personal Music Devices (PMDs) range between 75-105 dB and of discos between 104.3-112.4 dB so their chronic use leads to Noise Induced Hearing Loss [NIHL]. NIHL can be prevented to a large extent by reducing exposure time and levels. For this attention has to be drawn to the need for ensuring that sufficient preventive measures are in place. 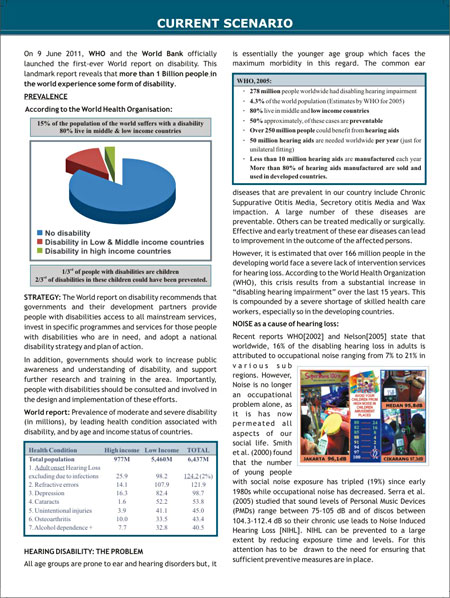